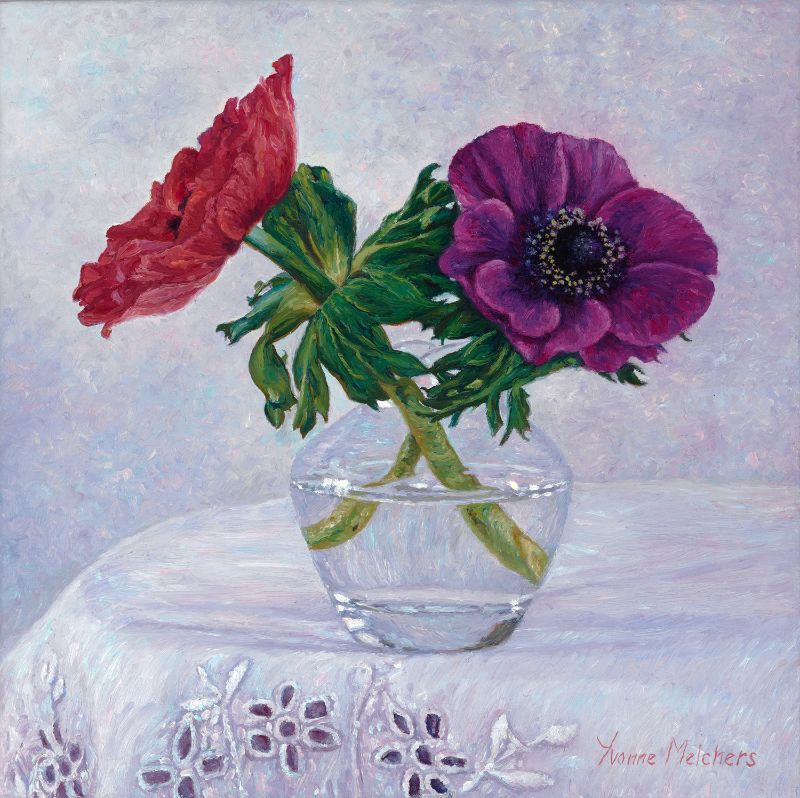 ROOMS WITH A VIEW - Room with a View/Summer in Venice

ROOMS WITH A VIEW - Room with a View/Summer in Pacina

ROOMS WITH A VIEW - Room with a View/Spring in Provence 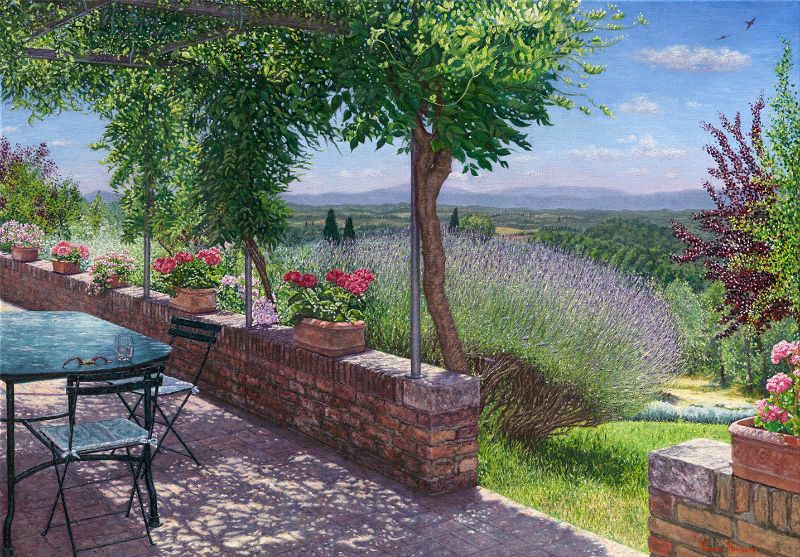 ROOMS WITH A VIEW - Room with a View/Summer in Stresa

ROOMS WITH A VIEW - Room with a View/Spring in Sardinia

ROOMS WITH A VIEW - Room with a View/Winter in Rome 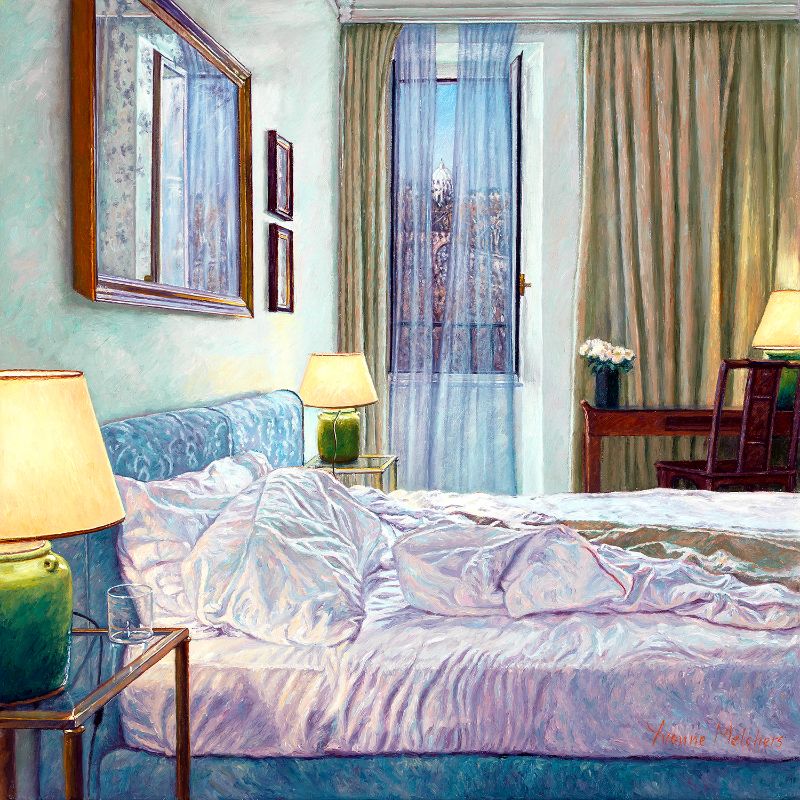 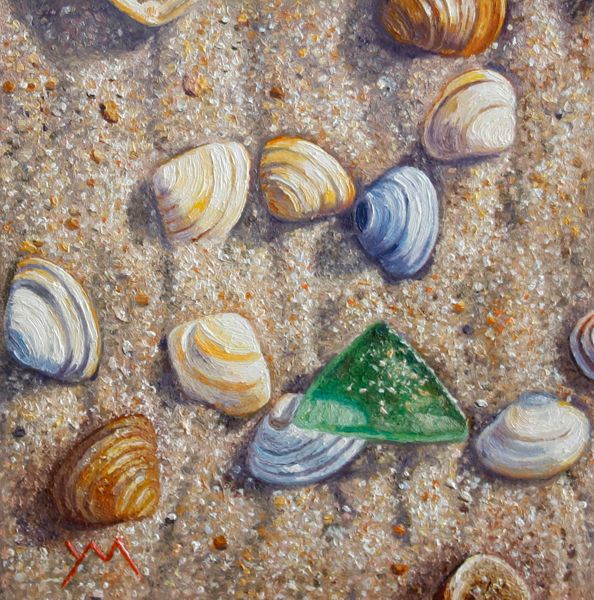 STILL LIFES - This Morning she was still Flying

STILL LIFES - Camelia's from my garden

STILL LIFES - In my Bathroom 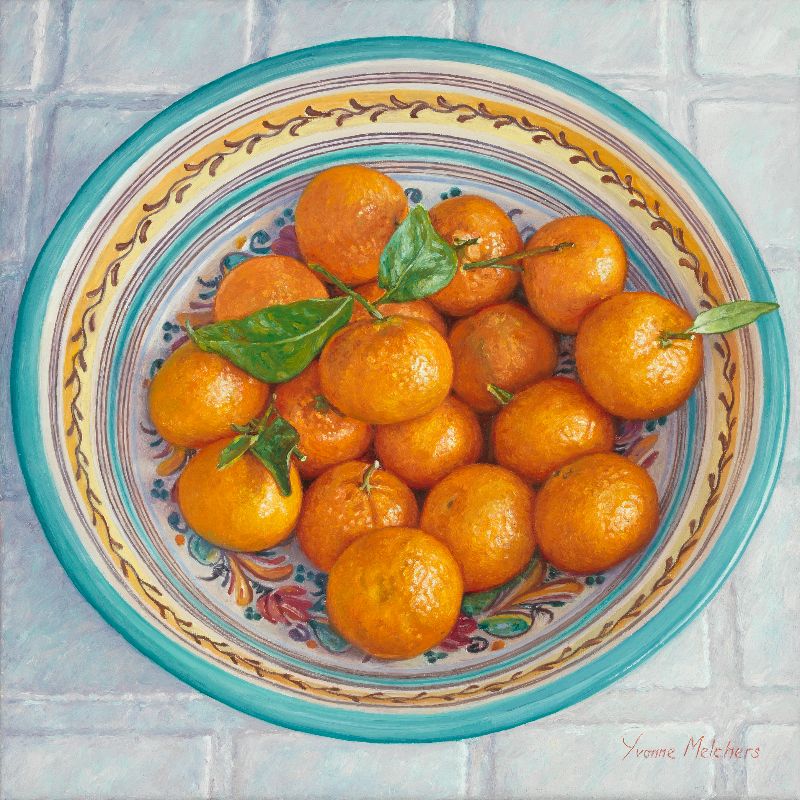 PORTRAITS The Bartelsman Children in the Vondelpark

For an extensive illustrated overview of her work, please see the essay that artist/writer Lorena Kloosterboer published at Medium.com in June 2020:

Yvonne Melchers (born in Haarlem, The Netherlands) studied at the Rietveld Art Academy in Amsterdam, but had to leave after one year on account of  other obligations. She always continued to draw and paint next to her work at the Amsterdam Office of Iberia Airlines and at the Academic Hospital in Amsterdam. In 2009 she could quit her job at the hospital  and from then on she has painted full-time. Apart from the one year at the Art Academy and some short courses she is self-taught. Her work is realistic-figurative, with a strong preference for oil paint. Generally using the paint straight from the tube and using mostly bristle brushes she has developed her own impasto technique where the brush strokes  are clearly visible. For all of her work in oil she uses a very limited palette, the  "colours of Monet", which are five colours besides the whites.

Through the years her main themes have been the Dutch coasts with their cool light and the warm Italian life in all it's aspects. The Rooms with a View are predominantly situated in Italy. Since 2013 she has been working on a series Siena Palio Portraits, which are portraits of modern Italian men and boys who - wearing wigs and historical costumes - take part in the Historical Procession, the Corteo Storico,  that precedes the Siena Palio,  the famous horse race, that takes place twice a year (more information about the Siena Palio can be found on www.ilpalio.org). She has also made a small series of Still lifes and every now and then she likes to paint a commissioned portrait or other subject. Since 2001 she has been working in The Netherlands and in Italy (Siena) alternately, but from April 2012 she remains in The Netherlands, living and working in the Amsterdam area.

In 2013 she has been made a member of the Group of Contemporary Dutch Masters of realistic and figurative art that exhibit at the Museum Møhlmann in Appingedam (Northern Netherlands) at least once a year.

Invitation from this gallery in Zaragoza/Spain to participate in the exhibition celebrating the 20th anniversary "20 Años en 20x20" of this gallery in 2019. This traveling exhibition, in which 200 of the best contemporary realist painters in the world participate, consists of small works of 20x20 cm. and was held at Palazzo Bantierra in Zaragoza and  at the MEAM Museum in Barlona in 2019. In March 2020 a third exhibition was planned in Italy, but was postponed due to the Corona crisis and will probably be held in 2021.

Besides at the Museum Møhlmann her work is/was exhibited at Gallery Rijlaarsdam in Nieuwkoop, Gallery De Vreugd & Hendriks in Zandvoort, Gallery Lauswolt in Olterterp, Gallery Bonnard in Nuenen, Gallery Staphorsius in Westzaan, Gallery Montulet in The Hague and Gouda, Gallery Pictura in Aijen, Gallery Terbeek in Beetsterzwaag, all in the Netherlands, and at Galería ArteLibre in Zaragoza/Spain, Abend Gallery in Denver/Colorado and the Museum MEAM in Barcelona/Spain.

Her painting Room 32/Venetian Summer was selected for participation in ZomerExpo 2012 (Summer Exhibition 2012) in the Gemeentemuseum (Municipal Museum) in The Hague.

On Artsy.net, the large and succesful international virtual art website,  some of her works are exhibited and for sale through Abend Gallery in Denver and 33Contemporary Gallery in Chicago.

The portraits Siena Palio III (Istrice) and Siena Palio XI (Torre) from the series Siena Palio Portraits were semi-finalists in 2015 and in 2018 respectively in the prestigious  BP Portrait Award competition of the National Portrait Gallery in London.

The paintings The Shell Seekers/North Sea Blues and Dutch Delight III/North Sea Blues from the series The North Sea  were selected in 2017 and 2019 respectively as semi-finalists of Figurativas, one of the greatest international competitions for contemporary realistic/figurative art. The competition is organized every two years by the Museo Europeo d’Art Modern(MEAM) The names and works of the semi-finalists are published in the accompanying catalogue.

The portraits Siena Palio V (Comune) and Siena Palio XVIII (Tartuca) from the series Siena Palio Portraits were selected as semi-finalists in 2017 and 2020 respectively of this important annual international exhibition on contemporary portraiture. The competition is organized by Galería ArteLibre in collaboration with the MEAM Museum in Barcelona. The names of the semifinalists of 2020 and an image of their work will be featured in the special catalogue ModPortrait 2020.

In 2019 the portrait Siena Palio XIII (Nicchio) was finalist in the category Figurative  in the 14th International Salon Competition, the largest international competition on contemporary realism (almost 5000 submissions from 80 countries). This portrait was featured in the beautiful accompanying very heavy catalogue.
In 2020 the diptych painting Siena Palio XVI and XVII (Aquila) and the painting Dutch Delight III/North Sea Blues both became semi-finalists in the categories Portraiture and Figurative respectively. The names of the semi-finalists and the images of their works are featured at the website of the ARC

Numerous publications in Dutch and international art magazines and books, mostly on realistic/fugurative art.  Please check her website in the chapter Publications.

On Facebook she has been made member of the artist groups Poets/Artists (US), IBEX Art Insiders, Master Painters and Sculptors of the World (FR), The Representational Art Group (US) and Todays Masters of Fine Art GB). In the Italian Museum of Contemporary Art (IT)  a room dedicated to her work - Sala Yvonne Melchers -  has been created.

The paintings of Yvonne Melchers have not only been sold in The Netherlands, but can also be found in collections in Italy, Spain, Germany, Belgium, France, The United States and Australia.